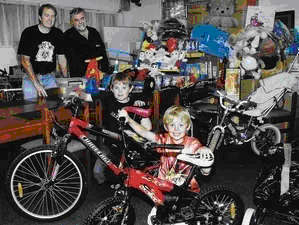 Generous union members have raised $21,000 and gathered items to send a little comfort to children affected by the bushfires in Victoria.

Mr Courtney’s sons Tane, 9, and Brad, 7, have even contributed by donating their own bikes to children in Victoria. “There have been donations of bikes all through to bedding and handmade dolls,” Mr Courtney said.

“There are boxes and boxes of brand new things,” forests union Tasmanian secretary Scott McLean said. All of the toys have been sorted and put into boxes stored in the shared boardroom of both unions in Launceston. “We have a number of meetings in here still and people go `well, where are we supposed to sit?”‘ Mr McLean said. “The response from members in sites that they (union representatives) have visited is tremendous. Contributions of money, toys and household items have come from sites across the State.”

About the Author: Super-Admin