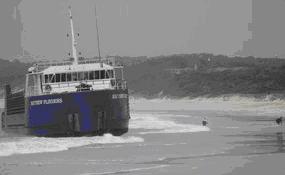 Livestock Ship Runs Aground after allegations King Island meat workers tamper with propeller. The Matthew Flinders ironically was washed onto the beach with 300 cattle on board on King Island after Swift Australia announced to shut down its King Island site.

Most members should be aware of the recent temporary closure of the King Island site in March this year.

The new owner Swift Australia made a decision to shut the plant so they could do an 8 week review of the operations.  This come as quite a surprise to our members and the local community as the plant was running at near full production in the peak of the season.

The company’s position highlighted the high cost of energy, effluent problems and the uneven playing field when it came to purchasing livestock because of the Tasmanian freight equalization scheme.  It was good to see our premier supporting our members on the island.

The premier DAVID BARTLETT demanded the owners reinstate its 100 workers immediately. The premier stated “These workers should be reinstated on their salaries,” he said. “I believe they have been treated outrageously”.  The Liberals response through Jeremy Rockcliff thought those words were a bit harsh against the company.  A typical response from Jellyfish Jeremy.

The plant stayed closed for 9 days.  The company received an undertaking from the state government that as long as the company reopened for the review the losses over this period would be underwritten.
We informed the company that it was our view that all permanent workers that were stood down should have been paid for the period. The company paid out entitlements to permanents. This issue is still being investigated and if necessary the alleged breach of the agreement will be taken to the commission to be arbitrated if the company does not repay the entitlements sourced because of the shut down.

The company recently flew in 5 engineers to assess the site which in our view is a positive sign. The local farmers are supporting the plant at the moment but what we really need to see is total commitment to the site. For the members information Jacko, our boning room delegate, has gone on Long Service Leave with Phil Hofmann acting in the role whilst Jacko’s away.

About the Author: Super-Admin